Today, I post for the first time, not as Adventures In Rettland, but as Colleen English, a writer. This feels awkward and scary, so I figure it’s a good idea. I’ve been blogging about our life under the heading of Rett Syndrome for a while. Truth is, life is bigger than Rett and I’ve been wanting to break out for a while but haven’t known how. I’ve been telling myself that people only read because they want to hear stories about Rett and Claire. To the friends who have called that out as a lie and encouraged me to write beyond Rett, thank you, SO VERY MUCH.

Things in our world have been slowing down and I’m trying to embrace our normal. Claire is at the end of her annual March tradition of epic seizures followed by a long and drawn out low grade bug that leaves her miserable and really sleepy. The new thing that I am having trouble coming to terms with is my crohns.

I’ve been in remission for a long time but not any more. I didn’t eat anything wrong and there isn’t anything right that I can eat to make it better. My body has just decided to revolt against me. As much as I want to complain, Claire rolls her eyes at me, as if to say, oh you aren’t well for a few months, at least you can talk and complain about it.

Friday began as a beautiful day. I had rested, eaten what works best and attempted the perfect cocktail of drugs so that I could go out and have fun for a few hours.  I was tired from being up all night sick and the night before with Claire. Still, the urge to feel alive was stronger than the fatigue, I was desperate.

Captain Awesome had taken the day off. We took the girls to school, stuffed some Friday folders and made our way to Mount Hermon Adventures.  Just 10 minutes from our home is this stunning zipline course through a coastal redwood grove. It was the easiest fun I’ve ever had. You walk up to the first line, they clip you in and wee, you fly above trees and creek and land half way up some of the most awe inspiring trees. It was impossible to think about the pain in my joints or worry about seizures, the beauty and joy was overwhelming. My favorite part was hanging with Huebert, a redwood thought to be about 1,000 years old. We took turns hanging off the side in what was oddly one of the most freeing moments of my life. Eventually we flew back down to reality and I crawled back into the comfort of our bed where I spent most of the next few days. Nothing had changed, my body was still drained, but my spirit was recharged. 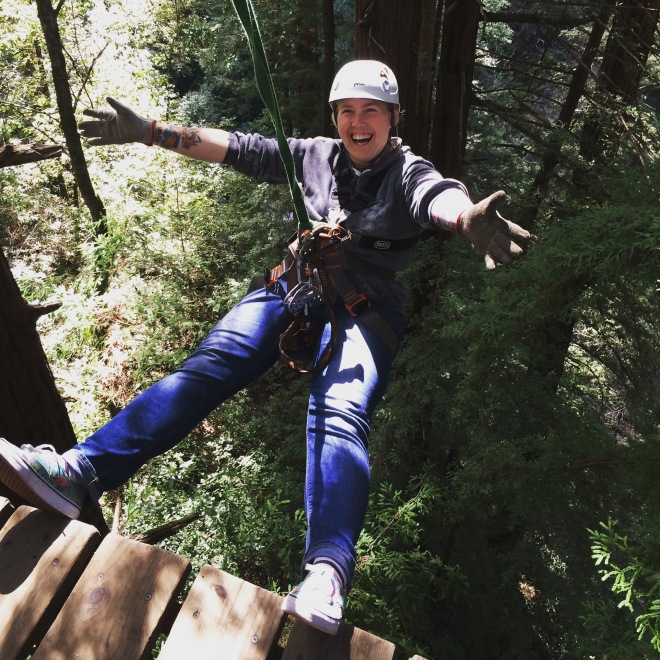 It’s easy when you are dealing with chronic illness to not make the time. To never feel up to something life giving. I urge you, please do. Regardless of being the patient or the caregiver, we all need to be recharged. What does it for you? I can’t always hang from a tree, so I’d love to hear what works for you.

One thought on “Recharging”