In a few days, Claire will turn 9. I don’t typically get too emotional around her birthday, at least I haven’t for a few years. This year however, I am a wreck and I know why. There has been one very big change since her last birthday, I stopped playing it safe. I stopped carefully managing my grief and I went for it. I dreamed. I dreamed of something that actually made a difference for Claire. I dreamed audaciously of a world where doctors told families what could be done for Rett syndrome (RTT). I dreamed of Claire, living a bigger life, one that was more than a series of appointments to keep her alive. I stopped playing it safe. 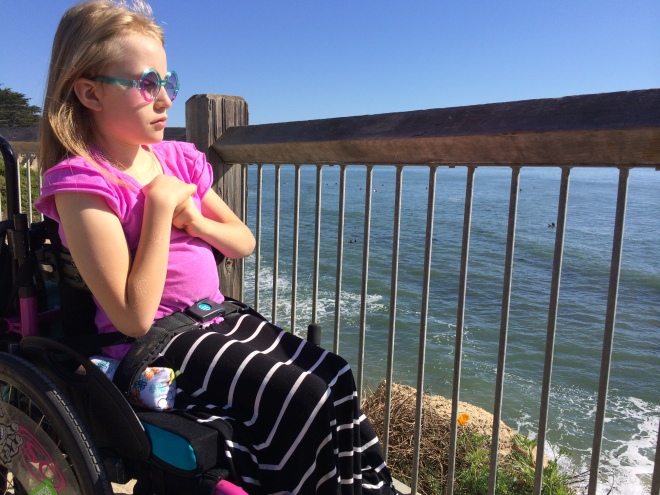 Today it occurred to me, this is why it hurts so freaking bad. It is amazing to dream big, to hope against all odds and to fight for it but it isn’t safe and that’s how people get hurt. The dream grew so much bigger once we started going. What was once hope for researchers that could measure RTT morphed into being part of that. I saw with my own eyes the effects of the potential treatment and with that my heart and my brain exploded with even bigger hopes and dreams.

As we stopped whatever was being injected into her it all became so much more real. The trouble with living fully alive is that it sometimes it hurts like hell. I reveled in every moment that Claire was freer in her body. Now as I see her trapped once again my heart is slowly being torn apart piece by piece.

So I sit here, thinking about life before RTT, all the potential, the hopes and dreams that seem so foreign now. Then I think about the future. As much as my heart is broken daily it is more often reinforced. When I hear of people holding lemonade stands and running races to raise money for research it is slowly mended together. As I watch Chloe reading to her, careful to move the book so that Claire doesn’t have to turn her head I have hope. For whatever reason, as I watched this video my heart burst again with renewed strength to dream. Friends and strangers all over the world are working toward the same dream. This is just one example of that. The dream the once seemed so far off and crazy. It is happening and I get see it.

That is why I am crying this week. Because it hurts and because it’s so good. I never would have seen things this way if I had played it safe. I would have used fewer tissues but I am glad I didn’t.