I was thrilled that when I asked Captain Awesome to write a guest post for Father’s Day he gladly accepted. He writes often but I rarely get to read his thoughts, so this is pretty special. It’s a big task to write something with a vague sense of a theme of father, have an hour and a half to do it and get an overtired 4 year old to sleep at the same time, but he did it, hence why we call him Captain Awesome. So here are his thoughts, I hope that you enjoy them.

Father: Noun. 1. A man in relation to his natural child or children; 2. an important figure in the origin and early history of something; 3.a man who gives care and protection

Fatherhood.  It’s one of the most important things I’ll do with the years that I have on this Earth. If I’m honest, it’s the thing I was least prepared for when I became one.  In fact, if I’m really being honest, (and I feel I should be because this is Colleen’s blog and that’s what she is) it challenges me on a daily basis to the core of who I am as a person and as a man.  Oxford defines a father in three distinct parts.  The first part is obvious and easy.  Claire and Chloe are my ‘offspring’ and it does provide a physical, tangible connection between them and me. I believe that all too often in today’s culture, that is where it stops.  Father’s have become a sort of jester in the family that exists solely for the purpose of being the pseudo-bread-winner and live-in fix-it guy that gives comic relief from their complete ineptness at anything relational.  This greatly damages the perception of fathers.  This perception keeps the substance of fatherhood at a superficial level, that the first part of the definition refers to.

But fatherhood is more than that.

The second part of the definition states that we are “an important figure in the origin and early history of something”.  Although I have a feeling the editors were referring to something other than our roles as fathers to our children, this can also be applied to the role of fatherhood as aptly as the first part of the definition.  What is more important than the origin and early history of another human being?  At least once a year I read a book called ‘Strong Fathers, Strong Daughters’ by Meg Meeker.  I read it because it scares the hell out of me.  The impact that I, Jared English, have on the outcome of the rest of another life is almost impossible to quantify.  The gravity of it is so sobering that there are times that I feel that I can’t possibly ever have enough to give. My short time with Claire and Chloe will have a profound impact on almost every facet of the rest of their lives, and that’s worth remembering as I relate to them on a daily hourly minute-by-minute basis.

The last part of the definition is the one I think I struggle with most, especially with Claire.You see, Claire is very special and there is NOTHING I can do to protect her from the thing that ravages her body on a daily basis.  As she turns blue from lack of oxygen and passes out only to come-to with a full-blown seizure, I AM POWERLESS.  As men it’s true that we do have an inclination to want to fix things, but I can’t fix this.

While each part of this definition of father is true, I don’t believe it is complete.  These are merely aspects of our role that we tend to get caught-up on.  The reality of the situation is that I, along with all fathers, are not called specifically just to be a good influence or focus on care and protection, because we can’t all the time.

We are called to love well.  Not influence.  Not protect.  Not fix.  LOVE.

And loving well is something that I know I can do, broken as I am.

My own path in fatherhood has been a gnarly one and challenging beyond what I could have possibly imagined.  If we as father’s can love our children well then we will be able to truly be the father’s we are called to be and what our families need us to be. 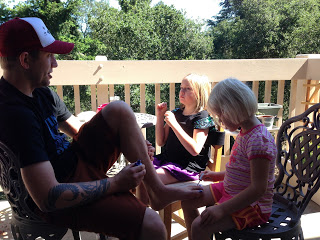 Jared I am so proud of you, the girls are lucky to have you and since we are being honest, so am I. We love you.