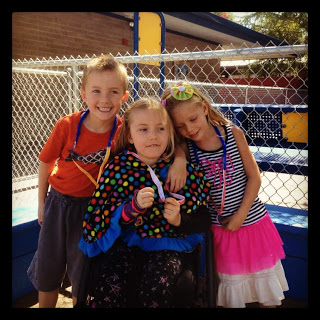 I wrote previously about how concerned I was about the start of school. I have never been so happy to proclaim, boy was I wrong! Sometime in the first week or two I was told that Claire was enjoying wheelchair races at recess with some of her friends from her mainstream class. I was relieved, Claire was having fun and with other kids, what more could I ask for? A few days later I learned that one of her friends took on the task of making very special medals for these races over the weekend. I was so touched. A friend was thinking about Claire, this was more than just not being isolated, this was normal 1st grade stuff. Then last week I received this picture from the teacher. Still when I look at it I am overwhelmed with joy. When I look at this picture I see three kids all on an equal plane, each with their own idiosyncrasies and insecurities but just having fun. I never thought that this sort of acceptance would be available to Claire. It’s hard to say that, but after a few rough years, I had given up on trying to have normalness with Claire. Isn’t it beautiful what the genuine authenticity of these two kids (and the others in the class) has overcome. They have restored my vision that Claire can thrive and play and do normal things, albeit a little different, it can still happen. In a world that is full of adults who believe and teach children that everyone has equal value, certainly great things will happen and right now that is the world that I live in!

2 thoughts on “A Picture of True Inclusion”