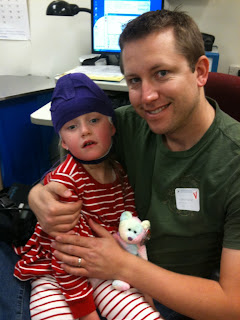 …sometimes you don’t. In my case, it seems to be that I don’t really get to pick, but none the less, I have recently had great experiences with both. The past Wednesday was far from a normal day. Jared had taken it off because Claire had to go up LPCH to get wired up for an ambulatory EEG. Since he is Captain Awesome, he offered to take her, at first and I must admit I was a little nervous. I pictured him in a ball crying while Claire screamed during the long process of gluing 28 wires to her head. I have done it twice and both times my nerve were a little fried at the end. I had BSF, which I figured would be a good distraction and maybe the wonderful children’s program that they have would wear Chloe out so she might nap well. Of course I was running late, it was the day I was supposed to get there early for the fellowship and I had all I could do to put one foot in front of the other without bursting into tears because Jared and Claire were off doing something that makes me very sad. As I dropped Chloe off, one of the women who runs the toddler room handed me a card. A few months ago I had run into her at Verve, my favorite coffee shop, while I was out with both Chloe and Claire. I quickly noticed that it was a gift card to Verve 🙂 and thanked her. She smiled and laughed with a remark about how I must need all the energy I can while watching Chloe run across the room. I honestly think this is one of the kindest gestures that anyone has ever done for me, at least in recent memory (which I admit is bad). Since I am being honest, I really don’t enjoy BSF that much. I go because Chloe loves it and I don’t mind the lectures and small group, I sit in the back, don’t talk much and try to blend in as best I can. But it didn’t work, somebody noticed me and it turned out to be the biggest of blessings. The two hours had gone by, it was time to head home and still I hadn’t heard from Jared. Eventually, this picture is sent to my phone, of coarse it went smooth as silk, that is why they call him Captain Awesome. I don’t really remember what the rest of the day held, I do remember being really tired, but in a good we did it sort of way. Then I woke up. Thursday morning I opened my eyes, looked at the video monitor and saw just the wire in Claire’s bed, no Claire. I ran in to find her giggling, sitting on the floor with the bandages that protect the wires off her head. Panic ensued, doctors were called and it was decided that she needed to go back in and they could squeeze us in at 8:30. I had a meeting at our home scheduled for 8:30 with the ABA team and Claire’s classroom teacher. So, Captain Awesome volunteered to take her. They were there and back quickly, other than the freaky episode in the car (which is why we are doing the EEG in the first place) again it was smooth. The rest of Thursday was pretty uneventful. We met up with Jared’s brother and his wife at the aquarium, saw fish and ate ice cream. Friday we were very pleased to see Claire in her bed in the morning. She was pretty excited to be going to get the wires off her head, it was obvious that it was very uncomfortable. Of course we opted to go get coffee first. I just love that I can take her into Verve with her head taped up and everyone talked to her as if it were no different than any other day. It really is one of those places where it feels good to go in and yes, most of the people in there know my name. After that the drive was surreal. She lit up, in the purest and most typical little girl sort of a way.
The video doesn’t really do it justice, but it is all that I have to try to show you. In the moments in the car, she didn’t hate rett syndrome, she wasn’t being actively robbed in the form of a dystonic episode, it was just pure. We pulled up to LPCH and the valet looked surprised, his remark was, different driver today. For some reason that really took the wind out of my sails. Being recognized at the coffee shop is way better than at the children’s hospital. As we waited for them to look at the data before unraveling the wires, it felt like everyone who walked by knew Claire. It was truly one of those bittersweet blessings.  While it is great that we have a place to go that offers such great care, I really wish that we didn’t have to go.