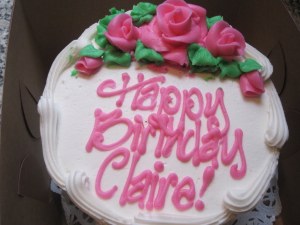 For the last 4 years I have hated October 24th. 2006 I was traveling home very ill after doing the Nike 1/2 marathon for my mom, who I thought was dying (Oct. 24 is also her b-day). 2007 we had just gotten the diagnosis. 2008 we were just starting school and in iep hell and a huge legal battle 2009 Chloe had started to shove in my face just how not typical her sister was. Aside from the 1st birthday, which I was required by grandparents to, I haven’t done a real cake for Claire. It has been a friend or a small dinner party, but nothing really for Claire. 2010 was our year and I am hoping that this is just the start of the birthday celebration that just gets better every year! It was more of a long birthday weekend than a “day”. It started after horse therapy on Friday. Our ABA conveniently canceled so we got to go to lunch with my parents who had just flown in and my cousin who was in town for hockey. We ate at The Counter and Claire got a milk shake and french fries (can you tell we are trying to fatten her up?) this was huge considering she typically gets organic whole grain pasta with grass fed ground beef, kale, eggplant, peppers and tomatoes. Saturday morning we did our usual trip to Verve for coffee, but Claire got a special treat, a whole cup of whipped cream sprinkled with chocolate shaving. Then we were off to the mall for shopping with Nana and ear piercing! A few weeks ago Claire announced “My birthday is October 24th presents earrings” how could I not give positive reinforcement to such wonderful and clear communication! We had a lot of fun shopping, she is very good at picking out clothes. Later Saturday we chose to open presents and then watch a movie before bed. Sunday was the actual birthday. We slept in a bit, played wii bowling and went out to breakfast all bundled up for the rain. I don’t know why I am so consistently shocked, but Claire does so well eating out. She had a quesadilla with peppers, onions, mushrooms and some other stuff that looked really good, and she ate it up fast! A little later we did “the cake” which was a pretty big deal. Not only did she get a real cake, we hooked up a switch to the fan so that she could blow out the candles. So we ended up singing close to 5 times, just so she could keep blowing the candles out, it was such fun! For the final birthday feet, Claire took in a tray of gluten free cupcakes dripping in purple and yellow sugar crystals, the closest thing to glitter that I could find. Her class had a huge party for her and even gave her a present of a little toy cat to hold on her lap (it is super creepy but she loves it!) and some hair clips. All in all, I think that 2010 will go down in the books as a huge success!